Home
The first thing we built after putting the RV on our land, was a shed. This shed was going to be used for storage and as an outhouse. The storage we needed for camping chairs, wood and tools; we discovered early on that keeping things under tarps attracts ants. We wanted the outhouse in addition to the rv toilet to avoid bathroom conflicts.

We didn't want to dig a 6 foot deep hole, so we bought an Envirolet composting toilet with a solar kit. These toilets have fans (powered by a solar  panel and a battery) which will dry out the contents and have a set of rakes that let you aerate and compost the stuff.

The shed is an 8' x 8' outdoor living gardener shed, which comes with pre-assembled half walls and roof panels made of cedar. It was delivered on one oversized pallet (the delivery guy had a hard time getting it off the truck lift).


The construction of the floor is important, you want a level base that allows ventilation around the floor boards and keeps rain and melting snow away from the boards. We opted for skids on top of paving stones, which was inexpensive, fast and efficient: three years later the floor is still level and dry.
After getting rid of te sod and levelling out the site, we put down three pavers per skid. The skids themselves are treated 4"x4" lumber. The floor frame then goes on top of the skids. 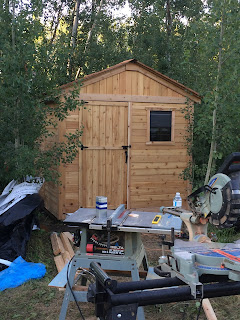 In total we used 15 pavers (3 on each skid, 5 4"x4" skids supporting the floor frame)
The walls come in pre-assembled sections that can be screwed into the floor pretty easily. The roof trusses are all cut for you, so you do not have to worry about angles.

UPDATE 12-JUL-2016:
The shed still smells like cedar two years later. The cedar roof shakes keep the inside cool and the window slides down to allow a breeze in.